The festival was held at The King’s Academy in August 2016 with the proceeds being used for local Holbeach Charities & good causes.

Deene McCraken’s Under 10s team received 5 sub jackets to keep the players warm whilst not playing on a Saturday morning. They more like to say a massive THANK YOU to Sean & The Holbeach Beer & Music Festival. 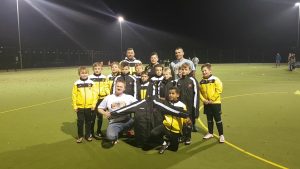 Sean Taylor from The Holbeach Beer & Music Festival presenting the jackets to the Holbeach Under 10’s Black Team.