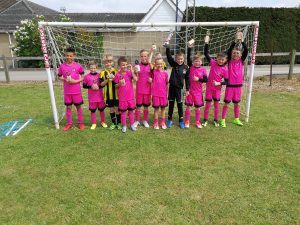 On Sunday 7th May Holbeach United Under 9s Black (pink for the day) won the Deeping Rangers Tournament.

The team started the day with a massive set back with Harry French, the goalkeeper, dislocating his thumb before the first game. Determined to do this for Harry the team took it in turns to volunteer in goal.

The boys were undefeated in the tournament conceding 3 goals and scoring 17 goals. It was fantastic to see Harry arrive back from hospital in time for the final and to lift the trophy.

Results on the day: –

Massive congratulations to the squad consisting of: –