Successful Weekend for the Club

It was another successful weekend for the club on 2nd & 3rd June.

Fresh back from their tour to Holland, Holbeach’s Under 15 Yellow squad competed at the Hungate Tournament. Despite a week of late nights, hectic days and dusk football matches, the squad were raring to go at Hungate. The boys were split into two teams, Yellow & Blue and both qualified from their respective groups. They avoided playing each other in the semi final but did meet in the final with the Yellow Squad running out 2-0 winners. As a team the boys collected the trophy together. 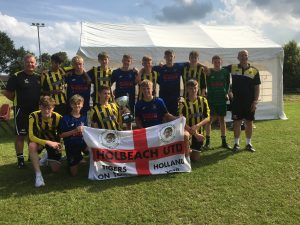 Also at Hungate was our Under 14s squad. Again they entered two teams, the Yellows and Blacks but on this occasion they met in the semi final.  The semi final finished 3-1 after extra time. The U14 yellows faced a mixed Netherton side, who had won the Under 14 PJAL Division 1 & 2  leagues. They played fantastically well taking the game to penalties after it had finished 0-0. Holbeach ran out victorious after a fabulous penalty save by Kieran Ferguson and a penalty scored by Holbeach’s Adam Day. 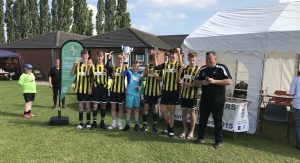 Finally our Under 10 Black squad went off to Leicester’s King Power Stadium to take part in a tournament on the Leicester pitch.  The boys were really determined from the off, playing some fantastic passing football. They won all their group games qualifying for the Semi Final against other group winners. They won a tight semi final 1-0 with Teddy Bell scoring the only goal. The Final saw them up against FC Boatmans from Yorkshire. Again the boys played fantastically well and raced in to a 2 nil lead thanks to goals from Theo Rutty & George Allmond. Boatmans did pull a goal back but the Holbeach boys stood firm. 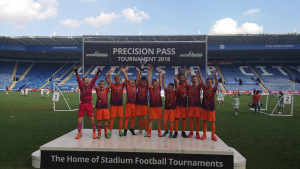 Well done to all the boys who took part, we are proud of you all #COYT #YOUNGTIGERS