HUCSA acknowledge their responsibility to safeguard the welfare of every child and young person who has been entrusted to its care and is committed to working to provide a safe environment for all members. A child or young person under the age of 18 engaged in any club football activity.

The key principles of welfare to HUCSA are that:

We acknowledge that every child or young person who plays or participates in football should be able to take part in an enjoyable and safe environment and be protected from poor practice and abuse. HUCSA recognise that this is the responsibility of every adult involved in our organisation.

HUCSA has a role to play in safeguarding the welfare of all children and young people by protecting them from physical, sexual or emotional harm and from neglect or bullying. It is noted and accepted that The Football Association’s Safeguarding Children Regulations (see The FA Handbook) applies to everyone in football whether in a paid or voluntary capacity.

We endorse and adopt The FA’s Responsible Recruitment guidelines for recruiting staff and volunteers and we will:

All HUCSA working in eligible roles, with children and young people – such as coaches are required to hold and in date enhanced DBS with Barring List check as part of responsible recruitment practice.

HUCSA supports The FA’s Whistle Blowing Policy. Any adult or young person with concerns about an adult in a position of trust with football can ‘whistle blow’ by contacting The FA Safeguarding Team on 0800 169 1863, by writing to The FA Case Manager at The Football Association, Wembley Stadium, PO Box 1966, London SW1P 9EQ, by emailing Safeguarding@TheFA.com or alternatively by going direct to the Police, Children’s Social Care or the NSPCC. HUCSA encourages everyone to know about The FA’s Whistle Blowing Policy and to utilise it if necessary.

HUCSA has appointed a Designated Safeguarding Lead (Club Welfare Officer) in line with The FA’s role profile. The post holder (details below) has completed Welfare Officer training provided by The FA and/or County FA. The Designated Safeguarding Lead is the first point of contact for all club members regarding concerns about the welfare of any child or young person. The Club Welfare Officer will liaise directly with the County FA (CFA) Welfare Officer and will be familiar with the procedures for referring any concerns. They will also play a proactive role in increasing awareness of Respect, poor practice and abuse amongst club members.

HUCSA acknowledge and endorse The FA’s identification of bullying as a category of abuse. Bullying of any kind is not acceptable at our centres. If bullying does occur, all players or parents/carers should be able to feel confident that incidents will be dealt with promptly. Serious incidents will be reported to the designated Safeguarding Lead.

We abide by the principles laid out in the FA’s Respect codes of conduct. HUCSA have clear actions it will take regarding repeated or serious misconduct at club level and acknowledges the possibility of potential sanctions which may be implemented by the County FA in more serious circumstances.

Safeguarding is everyone’s responsibility if you are worried about a child it is important that you report your concerns – no action is not an option.

Further advice on Safeguarding Children matters can be obtained from:

Our club acknowledges its responsibility to safeguard the welfare of every child and young person who has been entrusted to its care and is committed to working to provide a safe environment for all members. A child or young person is anyone under the age of 18 engaged in any club football activity. We subscribe to The Football Association’s (The FA) Safeguarding Children – Policy and Procedures and endorse and adopt the Policy Statement contained in that document.

Our club is responsible for setting standards and values to apply throughout the club at every level. Football belongs to and should be enjoyed by anyone who wants to participate in it.

In the event that any Youth Member, Parent/Carer, Club or FA Official or Coach feels that he or she has suffered discrimination, experienced or witnessed something of concern or that the Club’s Policies, Rules or Code of Conduct has been broken they should report the matter to The Club.

Our club promotes sportsmanship and fair play in all our teams both to our own players, officials and supporters but also to the officials and to the opponents.

Use your position to set a positive example for the people you’re responsible for and lead a better game for everyone.

Respect Code of Conduct for Spectators and Parents

If we believe in positivity during practice and matches our children will too.

Make sure everyone around you has a good time on and off the pitch.

By managing the game in a positive, calm and confident way, you’ll encourage everyone to have fun.

Who is allowed to take pictures of children (under 18s) playing sport and in particular what parents/carers are permitted to do. The FA would like to assure parents, carers, coaches, spectators, players and local media that we encourage the taking of appropriate images of children in football.

Within football we want you to use social networks, the internet, texts and email safely to get the information you need. We have produced the guidance below to keep us all safe and to ensure that we respect each other.

This club commits to ensure our website websites and/or social networking pages are being used appropriately and any online bullying will be dealt with swiftly and appropriately in line with procedures detailed in this policy.

Alongside the very beneficial aspects of modern communication technologies we have to recognise that there are also increased risks to children and young people. These risks must be appropriately managed.

Responsible use of Social Networking Sites

The following guidance is provided not as an obstacle but to support clubs and leagues to manage their safeguarding responsibilities effectively.

Responsible use of text, email and social networking sites

Whilst the internet brings many benefits and opportunities it also opens up some new risks and challenges. That’s why The FA has teamed up with the Child Exploitation and Online Protection (CEOP) Centre to promote online safety and vigilance.

FA’s Safeguarding for All – https://falearning.thefa.com/course/view.php?id=1774

In order to aid the FA campaign to increase Safeguarding awareness in football, HUCSA is pleased to present this small news item which we hope will help. 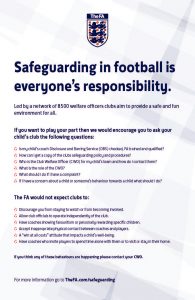 Thinking of joining our club? Find out how right here…