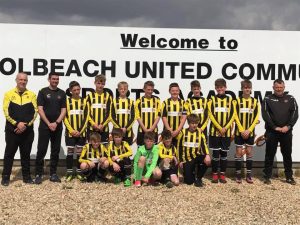 After going undefeated in the league 2016/2017 season and scoring over 120 league goals in 14 games Holbeach United where crowned league champions on Sunday. The boys battled back from a 2-0 deficit against a strong Leverington team to snatch the draw they needed in the last 10 minutes to take the title. Their manager and coaches would  like to thanks all the boys for the heart, passion and determination they have shown this season and look forward to taking their rightful places in Division 1.

Everyone at Holbeach United Community Sports Academy want to say a massive congratulations to the squad, managers and coaches.